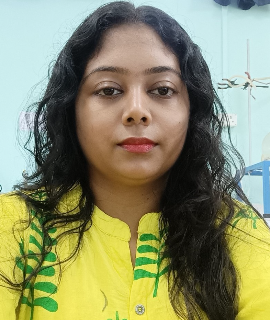 Arsenic exposure is a major threat to human beings all around the world due to its immense potential to cause various diseases including cancer. In the Southern Assam, arsenic contamination (>10 µg/L) has been reported in the ground water. In addition, population of Southern Assam expansively consumes ‘Sadagura’, a unique type of smokeless tobacco which might enhance the effects caused by arsenic. Phytonutrients is a good source of antioxidant with therapeutic potential in curing many diseases. Thus, the current study is aimed to investigate the ameliorative effect of curcumin on the sodium arsenite and smokeless tobacco induced toxicity on the reproductive health of female mice.

Miss Sweety Nath Barbhuiya studied M.Sc. in Life Science (Zoology) at the Assam University, Silchar, Assam, India and post graduated from there in 2015. She then joined the laboratory of Cell and Molecular Biology of Prof. Sarbani Giri at Assam University, Silchar, Assam, India. In 2016, she cleared State Level Eligibility Test (SLET). In 21st Dec, 2020, she has joined Patharkandi College, Patharkandi, Karimganj, Assam, India as the Assistant Professor in the Department of Zoology. She is going to submit her thesis shortly. She has to her credit 06 research papers published in the International journals and 03 book chapters, one published in IntechOpen and two chapters published in IGI global.